Avicenna was a pioneer for an advanced civilization 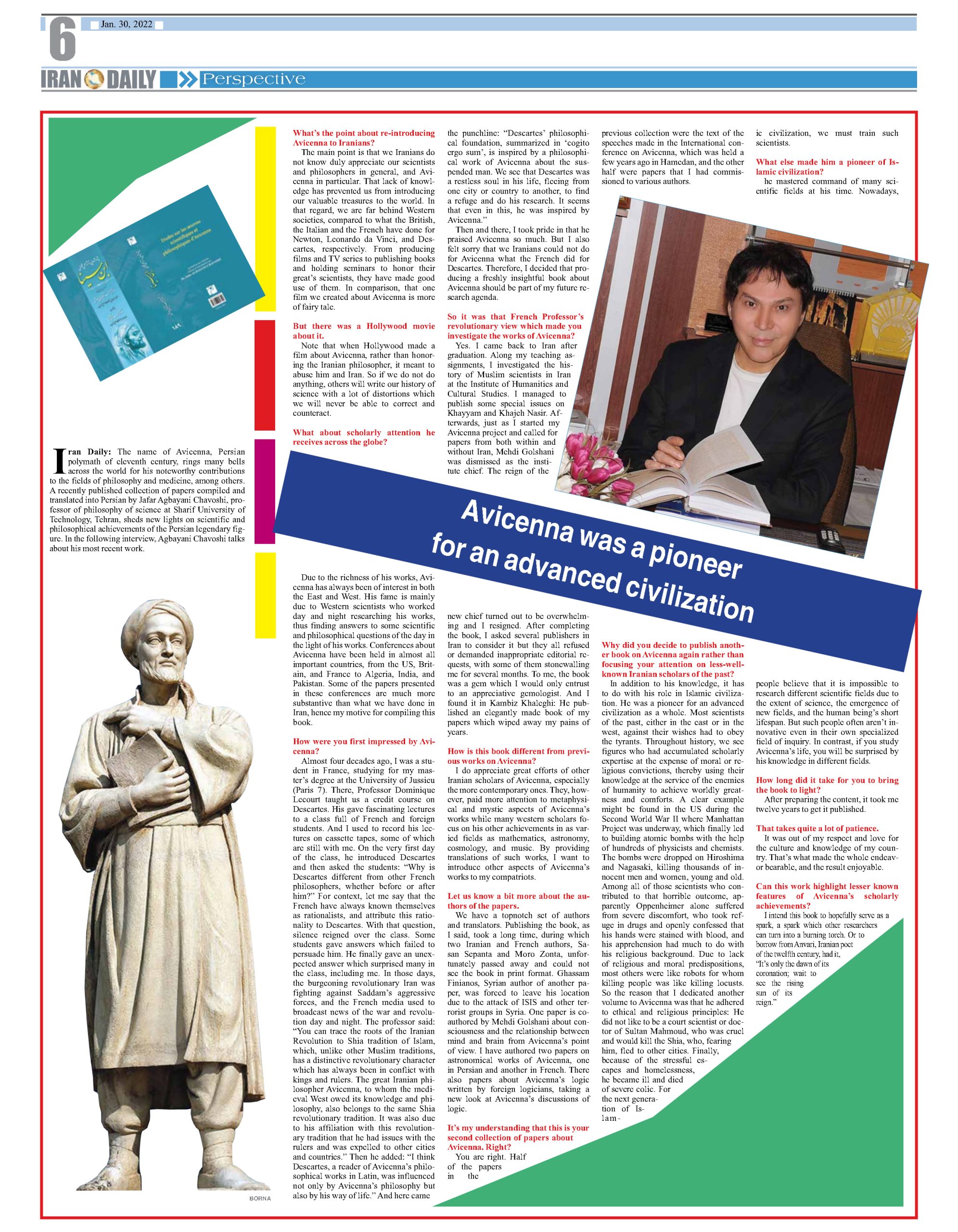 Iran Daily: The name of Avicenna, Persian polymath of eleventh century, rings many bells across the world for his noteworthy contributions to the fields of philosophy and medicine, among others. A recently published collection of papers compiled and translated into Persian by Jafar Agbayani Chavoshi, professor of philosophy of science at Sharif University of Technology, Tehran, sheds new lights on scientific and philosophical achievements of the Persian legendary figure. In the following interview, Agbayani Chavoshi talks about his most recent work.

What’s the point about re-introducing Avicenna to Iranians?
The main point is that we Iranians do not know duly appreciate our scientists and philosophers in general, and Avicenna in particular. That lack of knowledge has prevented us from introducing our valuable treasures to the world. In that regard, we are far behind Western societies, compared to what the British, the Italian and the French have done for Newton, Leonardo da Vinci, and Descartes, respectively. From producing films and TV series to publishing books and holding seminars to honor their great’s scientists, they have made good use of them. In comparison, that one film we created about Avicenna is more of fairy tale.

But there was a Hollywood movie about it.
Note that when Hollywood made a film about Avicenna, rather than honoring the Iranian philosopher, it meant to abuse him and Iran. So if we do not do anything, others will write our history of science with a lot of distortions which we will never be able to correct and counteract.

What about scholarly attention he receives across the globe?
Due to the richness of his works, Avicenna has always been of interest in both the East and West. His fame is mainly due to Western scientists who worked day and night researching his works, thus finding answers to some scientific and philosophical questions of the day in the light of his works. Conferences about Avicenna have been held in almost all important countries, from the US, Britain, and France to Algeria, India, and Pakistan. Some of the papers presented in these conferences are much more substantive than what we have done in Iran, hence my motive for compiling this book.

How were you first impressed by Avicenna?

Almost four decades ago, I was a student in France, studying for my master’s degree at the University of Jussieu (Paris 7). There, Professor Dominique Lecourt taught us a credit course on Descartes. His gave fascinating lectures to a class full of French and foreign students. And I used to record his lectures on cassette tapes, some of which are still with me. On the very first day of the class, he introduced Descartes and then asked the students: “Why is Descartes different from other French philosophers, whether before or after him?” For context, let me say that the French have always known themselves as rationalists, and attribute this rationality to Descartes. With that question, silence reigned over the class. Some students gave answers which failed to persuade him. He finally gave an unexpected answer which surprised many in the class, including me. In those days, the burgeoning revolutionary Iran was fighting against Saddam’s aggressive forces, and the French media used to broadcast news of the war and revolution day and night. The professor said: “You can trace the roots of the Iranian Revolution to Shia tradition of Islam, which, unlike other Muslim traditions, has a distinctive revolutionary character which has always been in conflict with kings and rulers. The great Iranian philosopher Avicenna, to whom the medieval West owed its knowledge and philosophy, also belongs to the same Shia revolutionary tradition. It was also due to his affiliation with this revolutionary tradition that he had issues with the rulers and was expelled to other cities and countries.” Then he added: “I think Descartes, a reader of Avicenna’s philosophical works in Latin, was influenced not only by Avicenna’s philosophy but also by his way of life.” And here came the punchline: “Descartes’ philosophical foundation, summarized in ‘cogito ergo sum’, is inspired by a philosophical work of Avicenna about the suspended man. We see that Descartes was a restless soul in his life, fleeing from one city or country to another, to find a refuge and do his research. It seems that even in this, he was inspired by
Avicenna.”

Then and there, I took pride in that he praised Avicenna so much. But I also felt sorry that we Iranians could not do for Avicenna what the French did for Descartes. Therefore, I decided that producing a freshly insightful book about Avicenna should be part of my future research agenda.

So it was that French Professor’s revolutionary view which made you investigate the works of Avicenna?
Yes. I came back to Iran after graduation. Along my teaching assignments, I investigated the history of Muslim scientists in Iran at the Institute of Humanities and Cultural Studies. I managed to publish some special issues on Khayyam and Khajeh Nasir. Afterwards, just as I started my Avicenna project and called for papers from both within and without Iran, Mehdi Golshani was dismissed as the institute chief. The reign of the new chief turned out to be overwhelming and I resigned. After completing the book, I asked several publishers in Iran to consider it but they all refused or demanded inappropriate editorial requests, with some of them stonewalling me for several months. To me, the book was a gem which I would only entrust to an appreciative gemologist. And I found it in Kambiz Khaleghi: He published an elegantly made book of my papers which wiped away my pains of years.

How is this book different from previous works on Avicenna?
I do appreciate great efforts of other Iranian scholars of Avicenna, especially the more contemporary ones. They, however, paid more attention to metaphysical and mystic aspects of Avicenna’s works while many western scholars focus on his other achievements in as varied fields as mathematics, astronomy, cosmology, and music. By providing translations of such works, I want to introduce other aspects of Avicenna’s works to my compatriots.

Let us know a bit more about the authors of the papers.
We have a topnotch set of authors and translators. Publishing the book, as I said, took a long time, during which two Iranian and French authors, Sasan Sepanta and Moro Zonta, unfortunately passed away and could not see the book in print format. Ghassam Finianos, Syrian author of another paper, was forced to leave his location due to the attack of ISIS and other terrorist groups in Syria. One paper is coauthored by Mehdi Golshani about consciousness and the relationship between mind and brain from Avicenna’s point of view. I have authored two papers on astronomical works of Avicenna, one in Persian and another in French. There also papers about Avicenna’s logic written by foreign logicians, taking a new look at Avicenna’s discussions of logic.

It’s my understanding that this is your second collection of papers about Avicenna. Right?
You are right. Half of the papers in the previous collection were the text of the speeches made in the International conference on Avicenna, which was held a few years ago in Hamedan, and the other half were papers that I had commissioned to various authors.

Why did you decide to publish another book on Avicenna again rather than focusing your attention on less-well-known Iranian scholars of the past?
In addition to his knowledge, it has to do with his role in Islamic civilization. He was a pioneer for an advanced civilization as a whole. Most scientists of the past, either in the east or in the west, against their wishes had to obey the tyrants. Throughout history, we see figures who had accumulated scholarly expertise at the expense of moral or religious convictions, thereby using their knowledge at the service of the enemies of humanity to achieve worldly greatness and comforts. A clear example might be found in the US during the Second World War II where Manhattan Project was underway, which finally led to building atomic bombs with the help of hundreds of physicists and chemists. The bombs were dropped on Hiroshima and Nagasaki, killing thousands of innocent men and women, young and old. Among all of those scientists who contributed to that horrible outcome, apparently Oppenheimer alone suffered from severe discomfort, who took refuge in drugs and openly confessed that his hands were stained with blood, and his apprehension had much to do with his religious background. Due to lack of religious and moral predispositions, most others were like robots for whom killing people was like killing locusts. So the reason that I dedicated another volume to Avicenna was that he adhered to ethical and religious principles: He did not like to be a court scientist or doctor of Sultan Mahmoud, who was cruel and would kill the Shia, who, fearing him, fled to other cities. Finally, because of the stressful escapes and homelessness, he became ill and died of severe colic. For the next generation of Islamic civilization, we must train such scientists.

What else made him a pioneer of Islamic civilization?
he mastered command of many scientific fields at his time. Nowadays, people believe that it is impossible to research different scientific fields due to the extent of science, the emergence of new fields, and the human being’s short lifespan. But such people often aren’t innovative even in their own specialized field of inquiry. In contrast, if you study Avicenna’s life, you will be surprised by his knowledge in different fields.

How long did it take for you to bring the book to light?
After preparing the content, it took me twelve years to get it published.

That takes quite a lot of patience.
It was out of my respect and love for the culture and knowledge of my country. That’s what made the whole endeavor bearable, and the result enjoyable.

Can this work highlight lesser known features of Avicenna’s scholarly achievements?
I intend this book to hopefully serve as a spark, a spark which other researchers can turn into a burning torch. Or to borrow from Anvari, Iranian poet of the twelfth century, had it, “It’s only the dawn of its coronation; wait to see the rising sun of its reign.”